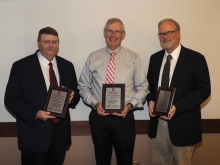 The Alumni Society Recognition Awards are presented annually during Homecoming Weekend. These awards are given to alumni who have shown distinction through their professional or non-professional activities. This year, we're proud to grant the award to three alumni who have set themselves apart through excellence in veterinary medicine or enhancing their community. Dr. Kent Ames received his DVM degree at Ohio State in 1974 and completed a residency and master’s degree in food animal medicine and surgery at Kansas State University. He has had a distinguished career as a clinician, educator, researcher, and leader in the veterinary profession. Dr. Ames spent his entire career on the faculty at Michigan State University until his recent retirement last December. He is a skilled diagnostician and surgeon, and is especially caring of both his clients and patients. His colleagues describe his special connection with his students, who held him in such high regard that he received the SCAVMA Outstanding Teacher Award six times, and the Norden Distinguished Teacher Award four times. And, although officially retired, Dr. Ames soon after returned to MSU to do clinical teaching. Beside his excellence in teaching, Dr. Ames was also a leader in the profession, having served as president of the American Association of Bovine Practitioners and as an AVMA Fellow in Washington, DC. He is the author of numerous manuscripts and abstracts, book chapters and the editor of the Nordsy and Ames Food Animal Surgery textbook. Dr. David Grant received his DVM degree from Ohio State in 1986, with a focus on a career in private practice and business. Following graduation, Dr. Grant worked in small animal and emergency practice in Ohio for a short time before moving to Dallas to start a private veterinary practice. Selling the practice three years later, he quickly shifted to relief work that rapidly evolved into his first major business, Relief Services for Veterinary Practitioners (RSVP) that currently serves several states in the South. In 1997 he formed Animal Care Technologies (ACT) as the vehicle for an ongoing procession of innovative veterinary practice training and communications, client services and products. Dr. Grant’s innovations and services include “Animal Care Training” now offered on-line and used throughout the country; “Vet Ed Notebook” used before the existence of IPADS to assist the veterinarian in educating their clients while in the exam room; and “Certified Veterinary Assistant Training Program” providing the curriculum and training materials taught at the high vocational level and adopted by many states. Dr. Philip Prater received his DVM degree from Ohio State in 1984 and has spent his career both as a professor at Morehead State University and a lengthy involvement with the Kentucky Veterinary Medical Association (KVMA) where he served on its Executive Board and as President. He also served for several years as the secretary of the American College of Theriogenologists. As a pre-veterinary advisor, Dr. Prater has counseled numerous aspiring veterinarians, and tirelessly worked to maintain state-funded contract spaces for Kentucky residents. In addition to his work in organized veterinary medicine, he has also provided his expertise to many countries around the world including Peru, Haiti and China. For his many years of service both within and outside the profession, Dr. Prater was named “Kentucky Veterinarian of the Year” in 2006. One can observe from his accomplishments and service that Dr. Prater has had a major and positive impact on animals and their owners, fellow veterinarians, future veterinarians and veterinary technicians, and society as a whole.