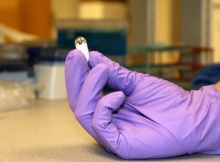 An alumnus of the college and former resident at the Veterinary Medical Center, Rudinsky is currently in the process of finishing his PhD, which focuses on gastrointestinal disorders and immunology. He recently completed a master's in gastrointestinal endocrine disease.

Much of Rudinsky's latest research centers on various gastrointestinal topics in dogs and cats as well as a novel endoscopy tool that the VMC adopted in June 2015, thanks to a grateful client donation. By utilizing a 1 ½ cm pill that encloses a compact, high-resolution camera, veterinarians can now fully analyze an animal’s gastrointestinal (digestive) tract.

“It’s really the first time in veterinary medicine that we’ve had the ability to evaluate the small intestine completely,” Rudinsky said. “There was no previous way of imaging that portion of the body in its entirety.”

The capsule can be swallowed by an animal directly, or it can be placed within the gastrointestinal tract during a traditional endoscopic procedure. It then moves through the system while taking continuous images, which are communicated to an external monitor for analysis.

Similar technology has been used in human medicine for about 15 years, but in veterinary medicine it’s just getting its start.

Capsule endoscopy bears many potential applications, but is currently being employed as a diagnostic instrument for disorders such as ulcers, polyps, tumors or any sort of gastrointestinal bleeding, Rudinsky said. 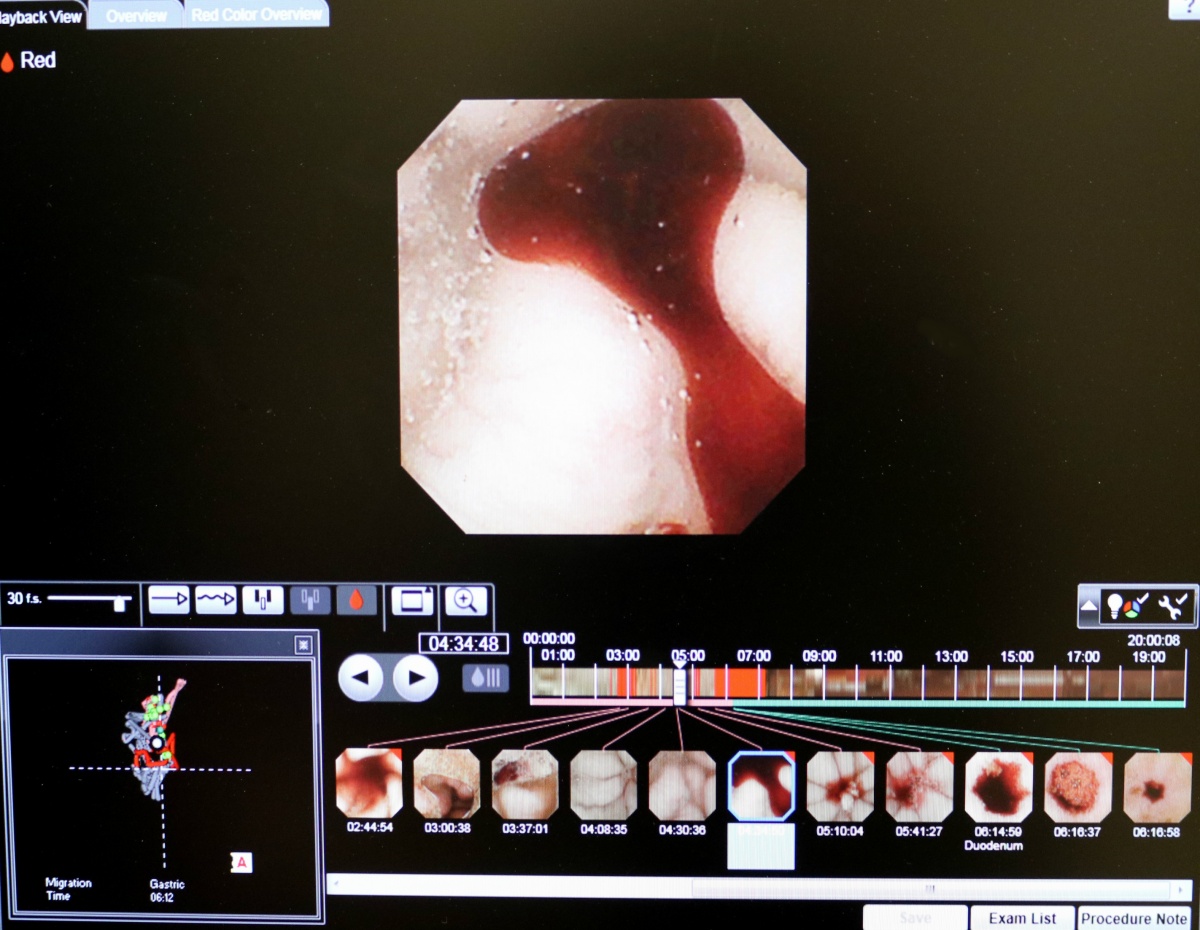 Imaging from capsule endoscopy reveals acute bleeding from an ulcer.

“Probably the best way to utilize it is in addition to regular endoscopy, which offers a major benefit because you can’t biopsy with the capsule alone,” he added.

Of primary significance is the device’s capability to identify lesions in their exact locations, which can be specified down to the inch. This is possible due to a three-dimensional tracking system that produces a graph of the capsule’s journey upon its completion. The graph can then be studied to pinpoint the site of any lesions or abnormalities.

“If a dog is going for surgery, for example, and it has metastatic neoplasia or some other kind of cancer issue, we can say to the surgeon ‘you need to be concerned about a lesion 14 inches from the gastroduodenal junction; you need to be concerned about a lesion at this location, etc.’,” Rudinsky said. “So one of the areas we’d like to see this branch into is surgical planning, so that before we send an animal to surgery we can increase our confidence that nothing will be missed.”

Along with potentially enhancing surgical accuracy, capsule endoscopy could play a role in testing the effectiveness of new drugs during clinical trials, since it provides a way to monitor and localize different structures in the gastrointestinal tract.

“For example, you could give this to a dog, test a drug like a de-wormer and test them again afterward to see how many worms they had, how many were killed and how many worms are left,” Rudinsky said.

Comparable studies are ongoing at institutions such as Cornell University and University of California, Davis.

The minimally invasive nature of capsule endoscopy makes it particularly advantageous for animals that are ill-equipped to undergo general anesthesia, he said, adding that it has provided an opportunity for intervention in two cases that otherwise would have rendered he and his colleagues powerless.

The VMC is one of three veterinary hospitals in the nation to offer capsule endoscopy, and the 10 or so times that it’s been used thus far have been successful and provided valuable clinical information.