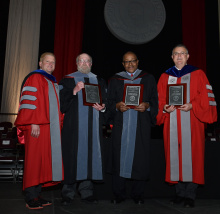 The Ohio State University College of Veterinary Medicine recognized several Distinguished Alumni at the 2019 Oath and Hooding Ceremony on Friday, May 4. Award recipients include:

Peter Constable, BVSc ’82, MS ‘89, PhD ’92, for his extensive contributions to the improvement of veterinary education, animal health, and public awareness of veterinary medicine’s contribution to human health. Constable is an accomplished teacher, mentor, and a world renowned speaker and lecturer. Throughout his career, he has been awarded over 50 grants, published nearly 230 peer reviewed manuscripts, and authored over 40 book chapters. Constable served as Department Chair of Veterinary Clinical Sciences at Purdue University from 2006 to 2014 when he returned to the University of Illinois to become Dean of the College of Veterinary Medicine. He has continually worked to advance the impact of the profession, including influencing the role of veterinary medicine in public affairs.

Constable is an accomplished clinician and researcher who has studied acid-base physiology, fluid therapy, shock, calf diarrhea, surgical conditions of the bovine abdomen, biostatistics, pharmacokinetic modeling, veterinary education and the cardiovascular response to endurance training. He is unique in the diversity of species he has studied including dairy cattle, other ruminants, horses, and sled-dogs. Has received the ‘Legends of Large Animal Medicine’ Award by his peers for his contributions to large animal practice. He is also a co-author of the tenth edition of Veterinary Medicine: A Textbook of the Diseases of Cattle, Horses, Sheep, Pigs, and Goats which serves as a key resource for large animal practitioners throughout the world.

John Baker BS ‘73, MS ‘75, DVM ’80, PhD ’84, for his impact in the field of bovine respiratory disease, his mentorship as a clinician and educator, and his outstanding record of leadership in academia. As a clinician researcher, Baker gained a national reputation as a scholar and thought leader through his groundbreaking research focused on viral agents of bovine respiratory disease that led to improvements in animal health and producer profitability. He has served as a trusted and valued advisor to policy makers, practitioners, producers and agriculturalists.

Baker has also served in several key administrative roles. During his service as Associate Dean for Research and Graduate Studies at Michigan State’s College of Veterinary Medicine (MSU CVM), the amount of research funding nearly doubled and he authored the first successfully funded Merck-Merial, NIH T-35 and NIH T-32 training grants supporting summer research experiences and DVM/PhD students, igniting many careers in animal health and biomedical research. John was then appointed as Acting Director and then Associate Director of MSU AgBioResearch (previously Michigan Agricultural Experiment Station) where he supported innovative research across MSU and the state of Michigan impacting food, energy and the environment. In 2014, Baker was named Dean of the College of Veterinary Medicine bringing special attention to curricular redesign, strategic guidance, and rebuilding key collaborations across the campus and statewide.

Calvin Washington, BS ’77, DVM ’81, for his meritorious service to our country, his excellent service to the profession and his unwavering commitment to mentoring within the community. Soon upon completion of his DVM, Washington founded the East Columbus Veterinary Hospital, which provides high quality affordable veterinary care for residents of a socioeconomically distressed area of the city. His practice has thrived in Columbus for 37 years. Washington has successfully mentored and influenced numerous students to enter the profession. He utilizes his practice and offers life-coaching while introducing minority students to veterinary medicine as a career and has dedicated his life to mentoring one of the most underrepresented groups within the field of veterinary medicine, African American males whom make up <2% of the profession.

The State University College of Veterinary Medicine recognized Frank Stanton as an Honorary Distinguished Alumni at the 2019 Oath and Hooding Ceremony on Friday, May 4. Elisabeth Allison accepted on his behalf.

Frank Stanton, MS ’32, PhD ’35, for his advocacy for canine health and wellness, amazing generosity and continued dedicated to the college. Stanton joined CBS as Research Director in 1945 and was named President in 1946. As president, he reorganized CBS into separate divisions for radio, television and laboratories, oversaw the development of the network’s logo and was chiefly involved in the construction of its Manhattan skyscraper headquarters. He was influential in the congressional decision to televise presidential debates, resulting in television becoming a dominant force in presidential politics. Following his retirement from CBS, Stanton served as COO of the American Red Cross as well as serving on numerous boards and foundations. He was admired by politicians, businessmen and fellow broadcasters as a principled executive with high aspirations.

Frank established the Stanton Foundation that supports areas where he was unable to complete his charitable intentions during his lifetime, specifically international nuclear security, freedom of speech, and canine health and wellness. He had a true passion for dogs and had canine companions his entire life. When he and his wife Ruth were at Ohio State in the mid-1930s they brought their Boston terrier puppy to the Veterinary Hospital. Frank never forgot the service they experienced and the care their puppy received. When his wife passed, he created the Ruth Stanton Endowed Chair of Veterinary Medicine in her honor.

More recently in 2016, was the Stanton Foundation’s transformational $39 million gift to establish the Building Preeminence in Veterinary General Practice Education (BPVGPE) program. This generous gift established the Frank Stanton Endowed Chair in General Practice and Canine Health and Wellness, and made possible hiring of several faculty and staff, and the construction of the new Veterinary Clinical and Professional Skills Center (VCPSC), a state-of-the-art education and assessment resource, unique in veterinary education.