The first discovery of transmissible carbapenem-resistant enterobactericeae (CRE) in U.S. livestock has been made by a research team lead by Dr. Thomas Wittum, Professor and Chair of Veterinary Preventive Medicine. Their study focuses on CRE recovered from the environment of a swine farrow-to-finish operation in the United States and includes researchers Dixie F. Mollenkopf, Jason W. Stull, Dimitria A. Mathys, Andrew S. Bowman, Sydnee M. Feicht, Susan V. Grooters and Joshua B. Daniels.

CRE are considered an “urgent” public health threat by the U.S. Centers for Disease Control and Prevention. These multidrug-resistant bacteria can produce serious life-threating disease and are found primarily in hospitalized patients. 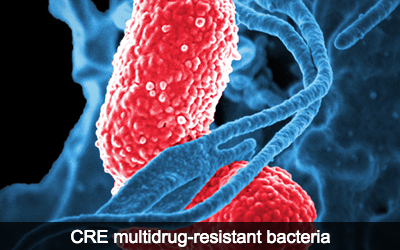 The presence of CRE in livestock poses a threat to animal health as well as human health because of their potential introduction into the U.S. food supply in fresh meat products. “Finding CRE at a livestock farm in the U.S. is definitely a concern, and represents another escalation of the antibiotic resistance threat”, said Dr. Wittum.  The CRE were discovered in the farrowing and nursery barns at a 1,500 sow, farrow-to-finish swine farm. Several species of bacteria with the same resistance gene known as IMP-27 were repeatedly found by researchers during regular visits to the farm. Carbapenems are never used in animals intended for food, but other types of beta-lactam antibiotics, such as ceftiofur, are commonly used on farms to treat sick animals.

On this farm, CRE were frequently found in the farrowing barn where ceftiofur was regularly used to treat piglets. In other barns where ceftiofur was not used, the CRE were rare. The researchers found no evidence that CRE or the IMP-27 gene were present in pigs when they entered the food supply as fresh pork. “This is a major development and it is imperative that we take measures to slow the emergence and spread of CRE because there are such major ramifications if they go unhindered.” said coauthor Joshua Daniels, a veterinary clinical microbiologist and Director of the Clinical Microbiology Laboratory at The Ohio State University Veterinary Medical Center. 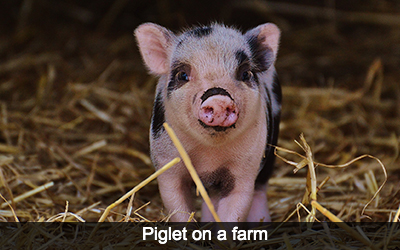 “There is the primary concern of increased risk to human health, but there are also increased risks to animal health and the economic well-being of food producers – not only because disease may be more difficult to treat in livestock, but because perception may affect attitudes of consumers toward buying meat.” How the IMP-27 gene was introduced into the farm is not known. The farm maintains a high level of biosecurity, which is typical for swine farms in the U.S., by not allowing livestock to be introduced from other farms and requiring visitors to shower when they enter and leave the swine barns. The researchers believe that IMP-27 was likely introduced onto this farm from an unknown outside source, but that the selection pressure from ceftiofur use may have allowed it to spread throughout the farrowing barn. Researchers also reported that the IMP-27 gene was located on a highly mobile plasmid.

Plasmids are non-chromosomal, self-replicating genetic material carried within the bacteria. They play an important role in the spread of antibiotic resistance genes because they are readily shared among bacteria as a survival mechanism. “Plasmids of this type, known as IncQ, have one of the broadest bacterial host ranges of any known plasmid, which increases the likelihood that the IMP-27 gene will continue to spread”, said Dixie Mollenkopf, senior author of the manuscript and a graduate research associate at the College of Veterinary Medicine. 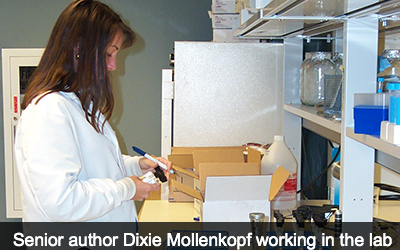 These results emphasize the need for expanded surveillance for resistant bacteria such as CRE on U.S. farms, suggest the researchers. In addition, some of the ways that antibiotics are used to treat sick animals on farms may need to be evaluated. One such practice, known by its FDA-approved label indication of ‘disease control’ allows some antibiotics, such as ceftiofur, to be used to treat all animals in a group, both healthy and sick, in order to control the spread of a disease outbreak. “The use of ceftiofur for disease control in livestock populations may be providing important selection pressure on bacteria that promotes the spread of CRE and other important multidrug-resistant bacteria” said Wittum.

This research was funded by the USDA National Institute of Food and Agriculture Competitive Grants Program and The Ohio State University Public Health Preparedness for Infectious Diseases Program. The study is published in the Antimicrobial Agents and Chemotherapy, a journal of the American Society for Microbiology. For more media inquiries about the CRE discovery in U.S. livestock please contact Shantay Piazza a 614-292-3752 or piazza.31@osu.edu .