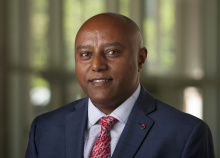 About a decade ago, Ohio State University College of Veterinary Medicine researcher Wondwossen Gebreyes and his team discovered the molecular mechanisms that play a role in triggering bacterial antibiotic resistance. The researchers identified microbes that, after becoming tolerant to specific disinfectants, would automatically become resistant to a wide range of antibiotics. Disinfection practices have changed as a result in environments ranging from hospital rooms to pig farms.

As the word of these discoveries spread in the scientific community, Gebreyes, a professor of veterinary preventive medicine, was invited to help researchers in Latin America and Eastern Africa, and later in Asia and Europe, with investigations of multidrug-resistant organisms and establishing molecular epidemiology capacity.

His body of molecular epidemiology research, and the broad worldwide partnerships that followed, were cited today as the National Academy of Medicine (NAM) announced Gebreyes’ election to the academy’s 2021 class of inductees, considered one of the highest honors in the fields of health and medicine.

Gebreyes was recognized by the academy for his leadership in molecular epidemiology and global health and for providing fundamental insight into how animal agricultural and environmental systems influence public health, community development and livelihood worldwide.

“I’m very humbled. But the work starts now – it’s a place for service and more action,” he said. “I’m looking forward to serving the collective scientific community and communities in general.”

The NAM was founded in 1970 as the Institute of Medicine and is one of three academies that make up the National Academies of Sciences, Engineering and Medicine in the United States. The academies are private, nonprofit institutions that work outside of government to provide objective advice on matters of science, technology and health.

The 2021 inductees represent the most diverse class of new members to date, composed of approximately 50% women and 50% racial and ethnic minorities, according to National Academy of Medicine President Victor J. Dzau. New members are elected by their peers in recognition of outstanding achievement and their contributions to health and society.

Also the executive director of Ohio State’s Global One Health initiative (GOHi), Gebreyes has been a driving force behind Ohio State’s global impact for years in the area of One Health, a strategy to more fully understand and address the links between animal, human and plant health and the environment.

A significant part of GOHi’s work involves research, training and outreach capacity-building in partner countries – an initiative that traces back to Gebreyes’ initial international collaborations on studies of antimicrobial resistance.

“We have trained 28 PhDs so far through the program in molecular epidemiology, and they are now the people in their countries doing diagnostics of COVID-19 because the same tools are used,” he said.

GOHi involves faculty and students in colleges and institutes across Ohio State and has added basic and applied research and community outreach to the training and capacity-building core mission. External partners and funders include the Centers for Disease Control and Prevention, the U.S. Agency for International Development, the Bill and Melinda Gates Foundation and dozens of agencies in collaborating countries. The initiative is widely recognized for its global leadership and effectiveness, and Gebreyes now serves in an advisory capacity to other U.S. universities working to establish similar consortia.

“I enjoy tackling grand challenges, and the need for broader global capacity-building remains a priority,” he said. “We have learned from COVID-19 that the world is severely underprepared to address an infectious disease pandemic.”

Gebreyes is also currently an American Council on Education fellow at Michigan State University where, in addition to apprenticing in higher education leadership, he is collaborating on a project aimed at ensuring the U.S. higher education system of the future proactively addresses societal challenges, especially those targeted by the United Nations Sustainable Development goals and that remain critical in Ohio and other states.

“Perhaps now more than ever, we understand how interconnected the world really is. With his scientific knowledge and extraordinary international partnerships, Dr. Gebreyes will no doubt be an important contributor to the National Academy of Medicine’s deliberations and policy recommendations,” said Grace Wang, executive vice president for research, innovation and knowledge at Ohio State. “We are so proud that he is being recognized for his work to improve global public health.”

Gebreyes’ election brings the total number of current Ohio State National Academies members to 33, including one professor who is a member of two academies. Gebreyes is one of 10 National Academy of Medicine members at Ohio State.