1. IFITM restriction of viral infection
The interferon (IFN) system is the first line of host defense against pathogen invasion, including viral infections. Shortly after IFN induction or viral infection, cells express hundreds of IFN-stimulated genes (ISGs) that modulate diverse biological processes, including the establishment of antiviral states. The IFN-induced transmembrane (IFITM) protein family belongs to a group of small ISGs (~15 kD) that block the early stages of viral replication. Specifically, IFITM proteins restrict entry of a wide range of viruses, including highly pathogenic influenza A virus (IAV), SARS coronarvirus, Ebolavirus (EBOV), and HIV.
Recent work from our lab and others showed that IFITM proteins inhibit cell-cell fusion by IAV HA, Semliki Forest virus (SFV) E1, and vesicular stomatitis virus (VSV) G proteins, which represent class I, II and III viral fusion proteins, respectively. Interestingly, we have found that some viruses are more sensitive than others to inhibition by particular types of IFITMs, suggesting that IFITM-mediated restriction of viral entry can be virus-strain specific and IFITM-species dependent (Li et al, PLoS Pathogens 2013). Indeed, we showed that IFITM2 and IFITM3, but not IFITM2, specifically interact with HIV-1 Env, thus inhibiting its processing and viral infectivity (Yu et al, Cell Reports, 2015). Currently, we are using a variety of biophysical, biochemical, forward genetics, as well as molecular approaches to dissect the distinct mechanisms of IFITM restriction of viral entry and cell-cell spread. The model viruses applied to this project include IAV, Ebola virus (EBOV), and HIV-1. 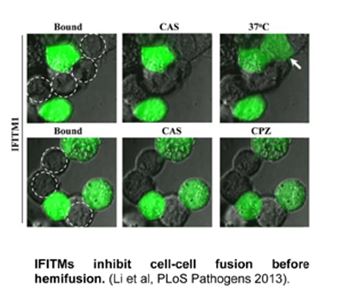 2. Viral entry, fusion and cell-to-cell transmission
Entry is the first step of viral replication and essential for viral pathogenesis. While the core mechanism of virus fusion and entry is known, it remains poorly understood how exactly viral fusion proteins are activated and how the entry process is controlled for most pathogenic animal viruses. The objective of this project is to better understand the mechanisms of membrane fusion and entry by EBOV and Zika virus. We are particularly focused on cellular and viral factors in the fusion triggering and entry process, including receptor binding, low pH, and additional cellular and viral determinants.
EBOV is a highly pathogenic filovirus that causes severe hemorrhagic fever in humans, with a fatality rate of up to 90%. Currently, there is no effective antiviral drug or FDA-approved vaccine against this deadly virus. Entry of EBOV into host cell is mediated by its sole glycoprotein, known as GP. It is believed that EBOV enters host cells through macropinocytosis, which is initiated by the binding of EBOV GP to attachment factors or cell surface receptors, such as DC-SIGN and TIM-1.Following the uptake of viral particles into late endosome and lysosome, GP is cleaved by cellular proteases, especially cathepsin L (CatL) and B (CatB), to a 19 kDa intermediate. The 19 kDa species then binds to human Niemann-Pick C1 (NPC1), the newly identified intracellular receptor of EBOV in endolysosomes, where virus-cell membrane fusion takes place. One recent interesting finding from our lab, in collaboration with Fredric Cohen’s lab at Rush University, is that low pH per se is not a trigger but that low pH-dependent cathepsin’s activity is critical for GP-mediated fusion (Markosan and Miao et al, PLoS Pathogens, 2016). Current experiments are focused on the exact mechanisms of triggering and fusion, with an ultimate goal to develop novel fusion inhibitors against EBOV. Similar efforts have been put on Zika virus, a flavivirus family member with distinct biological properties that are associated with microcephaly and neuronal damaging.
Because cell-to-cell transmission has been shown to be more efficient than the cell-free virus infection, we are also currently investigating viral and cellular factors that regulate EBOV and HIV-1 cell-to-cell transmission.
3. TIM, SERINC and HIV Nef
We recently discovered that TIM-family proteins potently inhibit release of HIV and other viruses in addition to promoting viral entry (Li et al. PNAS USA, 2014).  Specifically, we showed that expression of TIM-1 protein potently blocks HIV-1 Gag release, resulting in accumulation of mature viral particles on the plasma membrane. Notably, TIM-1 mutants deficient for PS binding are incapable of blocking HIV-1 release. The inhibitory effect of TIM family proteins on viral release can be extended to some other PS receptors, including AxL and RAGE, underscoring a general role of PS in HIV and other viral infections. However, it is currently unclear how viruses counteract TIM-mediated inhibition of viral release. The goal of this project is to understand how HIV-1 Nef protein might antagonize TIM-mediated restriction and how the newly discovered SERINC proteins, which are known to impair HIV infectivity but are antagonized by Nef, participate in this process. 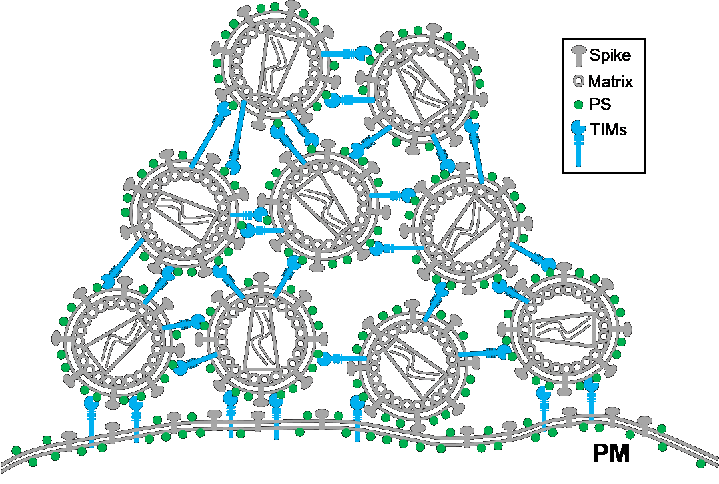 4. Cell signaling, viral oncogene and human lung cancer
Retroviruses have played fundamental roles in our current understanding of the molecular and genetic basis of cancer. One focus of our lab is to better understand the novel mechanisms of cell transformation by some oncogenic viruses, including retroviruses. We have been focused on two oncogenic sheep retroviruses, Jaagsiekte sheep retrovirus (JSRV) and enzootic nasal tumor virus (ENTV), which cause contagious lung and nasal adenocarcinomas, respectively, in sheep and goats. Distinct from most acutely transforming retroviruses, the envelope (Env) proteins of JSRV and ENTV are active oncogenes that induce malignant transformation in vitro and in vivo. More interestingly, the sheep lung tumor induced by JSRV strongly resembles human bronchiolo-alveolar carcinoma (BAC), a subclass of human pulmonary adenocarcinomas that is less associated with cigarette smoking. Hence, JSRV could provide a useful model for understanding the etiology and carciogenesis of human lung cancer. Current projects include molecular characterizations of cell signaling events triggered by some viral oncogenes as well as discovery of new human viruses associated with human lung cancers.