Dr. Ho received his degrees from California Institute of Technology (1974) and Harvard Medical School (1978). Subsequently, he did his clinical training in internal medicine and infectious diseases at Cedars-Sinai Medical Center/UCLA School of Medicine (1978-1982) and Massachusetts General Hospital/Harvard Medical School (1982-1985), respectively.

Dr. Ho has been at the forefront of AIDS research for 33 years, publishing over 350 papers. His elegant studies, beginning in 1994, unveiled the dynamic nature of HIV replication in vivo and revolutionized our basic understanding of this horrific disease. This knowledge led Dr. Ho to champion combination antiretroviral therapy that resulted in unprecedented control of HIV in patients. AIDS mortality in richer nations has declined 6-fold since 1996, and a massive international effort is now underway to bring such life-saving treatment to millions in the developing world. Dr. Ho has been the major driving force behind this major medical breakthrough in what is arguably the worst plague in human history. Dr. Ho's research team is now devoting considerable efforts to develop vaccines to halt the spread of the AIDS epidemic. Furthermore, he is leading a consortium of Chinese and American organizations to help address the crisis of HIV/AIDS in China.

Dr. Ho has received numerous honors and awards for his scientific accomplishments. He is the recipient of 12 honorary doctorates (including from Swarthmore, Tufts, Columbia, Tulane, University of Natal, Tsinghua University and University of Hong Kong). He has been chosen as the commencement speaker at Caltech, MIT, and Harvard School of Public Health. Additional accolades include the Ernst Jung Prize in Medicine, Mayor's Award for Excellence in Science & Technology, the Squibb Award, and the Hoechst Marion Roussel Award. Dr. Ho has been elected as a member of the American Academy of Arts and Sciences, Academia Sinica (Chinese Academy of Engineering, and the Institute of Medicine, National Academy of Science. He was a member of the Board of Overseers of Harvard University and is a board member of the MIT Corporation. He was inducted into the California Hall of Fame in 2006.

Dr. Ho was named Time Magazine's Man of the Year in 1996, and was the recipient of a Presidential Medal in 2001. 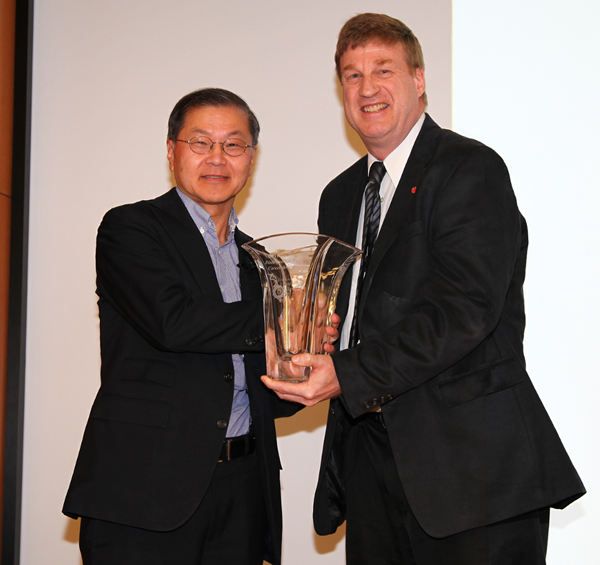 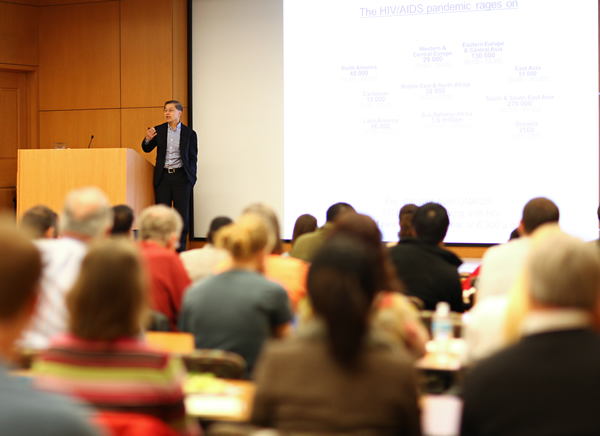 Dr. David D. Ho during his distinguished research seminar presentation to the Center for Retrovirus Research and OSU faculty, staff, and students.